App install fraud affects everyone buying app installs from ad networks and social media platforms, but it affects mobile gaming more than any other industry. This isn’t because gaming companies are uninformed – in our experience, they’re actually better prepared than any other vertical – but because of the sheer size of the user acquisition budgets involved.

This means the mobile gaming industry is a particularly lucrative target for fraudulent suppliers.

In turn, that means that there are huge incentives to develop and deploy more sophisticated methods of app install fraud, which sidestep basic off-the-shelf detection services. Awareness of these methods is lower, and that leaves the gaming industry exposed to fraud.

You’re likely familiar with unauthorised incent, and maybe you know the telltale signs of install farms. But what about the various types of attribution fraud stealing organic installs? And what about the next generation of bots which can artificially generate app installs, in-app performance and payments?

Nearly half of game installs are fraudulent

Over the past six months (March until August), Machine has analysed over 27.5m gaming app installs, bought from 26 of the highest-rated ad networks in the market. 36% of these app installs, we identified as fraudulent. Let’s break down the types of fraud we saw in these cases.

Firstly, let's have a look at the pre-install activity, the clicks. The data below shows the volume of artificial clicks – what is known as click stuffing – a form of attribution fraud trying to steal attribution for app installs generated organically or by other ad networks.

These clicks were categorically not coming from a human and therefore were blocked, preventing over 1.8m app installs from being stolen. This in turn keeps attribution data clean, and improves accuracy and increases organic attribution.

Now let's look at the install data. The pie chart below breaks down the percentage of app install fraud by category.

The two types of install farms, human install farms and auto-bot farms, together make up 31.52% of all fraudulent app installs. Incentivised apps, which is made up of unauthorised incent and incent abuse, make another 23.01%. By far the biggest category, though, is install hijacking – another form of attribution theft – at 24.2%, and it’s a tricky one to catch.

Fraudulent vendors steal the credit for installs that actually happened organically, or were generated by another supplier.

So, all those players you’re attracting to your game through word-of-mouth, a TV campaign or great app store optimisation end up being attributed to a fraudulent vendor, and you end up paying for them twice.

One of the common misconceptions we encounter from gaming clients is that they’ll be safe as long as they stick to the largest ad networks. It’s true that these bigger players tend to be better at eliminating app fraud than smaller ad networks, but they’re far from immune.

Our work with gaming clients covered the highest rated 26 ad networks (delivering a minimum 1,000 installs each). Only one of these networks kept fraud levels below 10%, and three were over 65% fraudulent. This included standard ad networks and two self-attribution platforms. These are the two biggest suppliers – but one of the two recorded over 25% fraudulent installs, and the other over 15%. 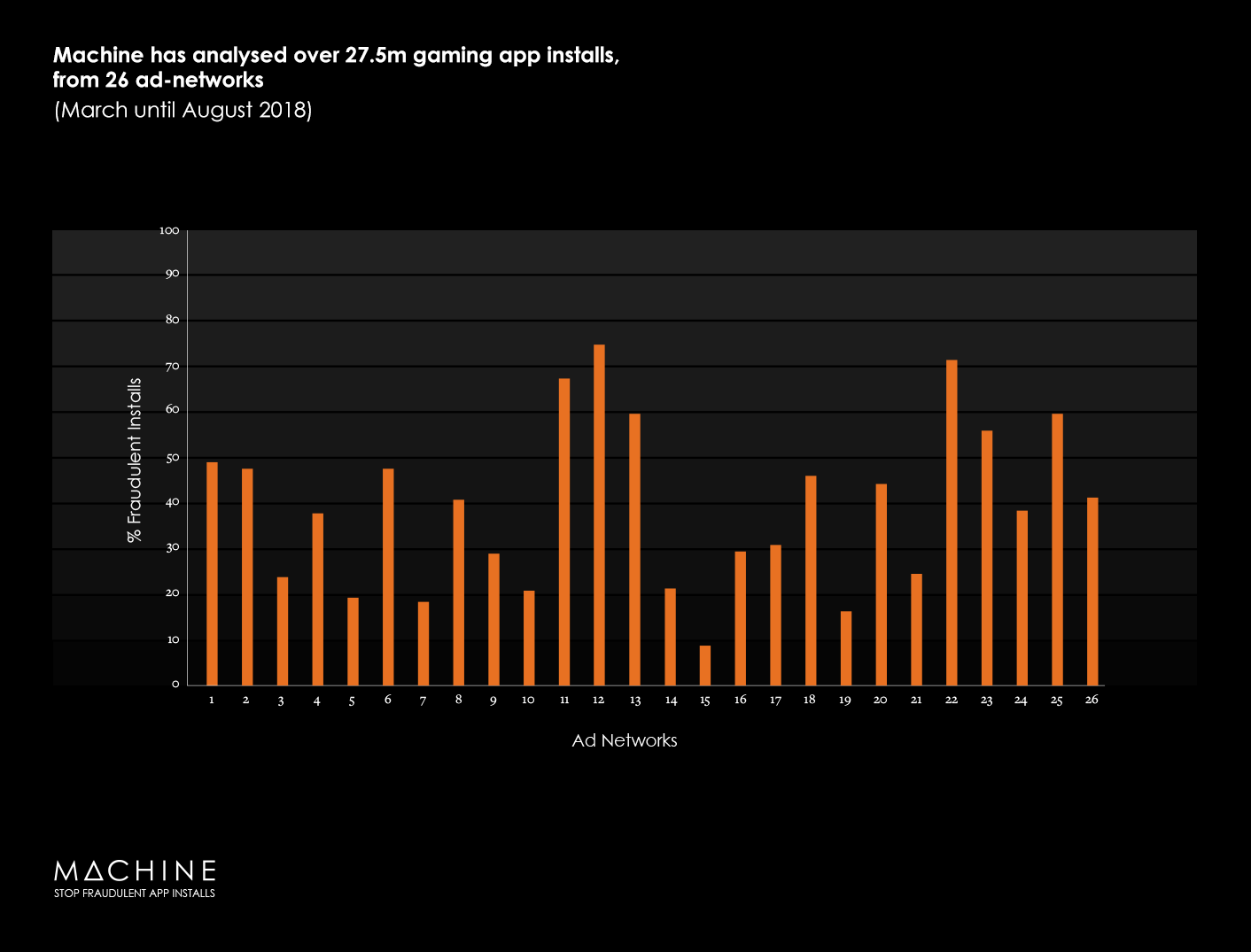 This misconception, about bigger players being totally safe, likely stems from working with basic fraud detection tools. If you’re working with an attribution partner, their fraud solution is likely off-the-shelf. They will have the same offering for a local hairdresser’s app as they do for a global gaming company that does millions of app downloads every month.

This ‘one size fits all’ approach means that more sophisticated methods slip through the cracks.

At Machine, we build up a data profile on the supply chain of each client, and use machine learning to identify all the different categories of fraud that affect them specifically – and then stop it, in most cases, before it happens.

Game over for app fraud

It’s important that the gaming industry faces up to the truth of app install fraud.

In our work with gaming clients, we’ve discovered significant amounts of app fraud that was going undetected by their previous services – as much as 60% more, in fact. This is a huge number of fraudulent installs that are being paid for without delivering results.

Once you filter and prevent all fraudulent installs – including the most sophisticated methods – you’ll end up with a far greater performance from your user acquisition budgets and, vitally, get your game into the hands of far more real players.