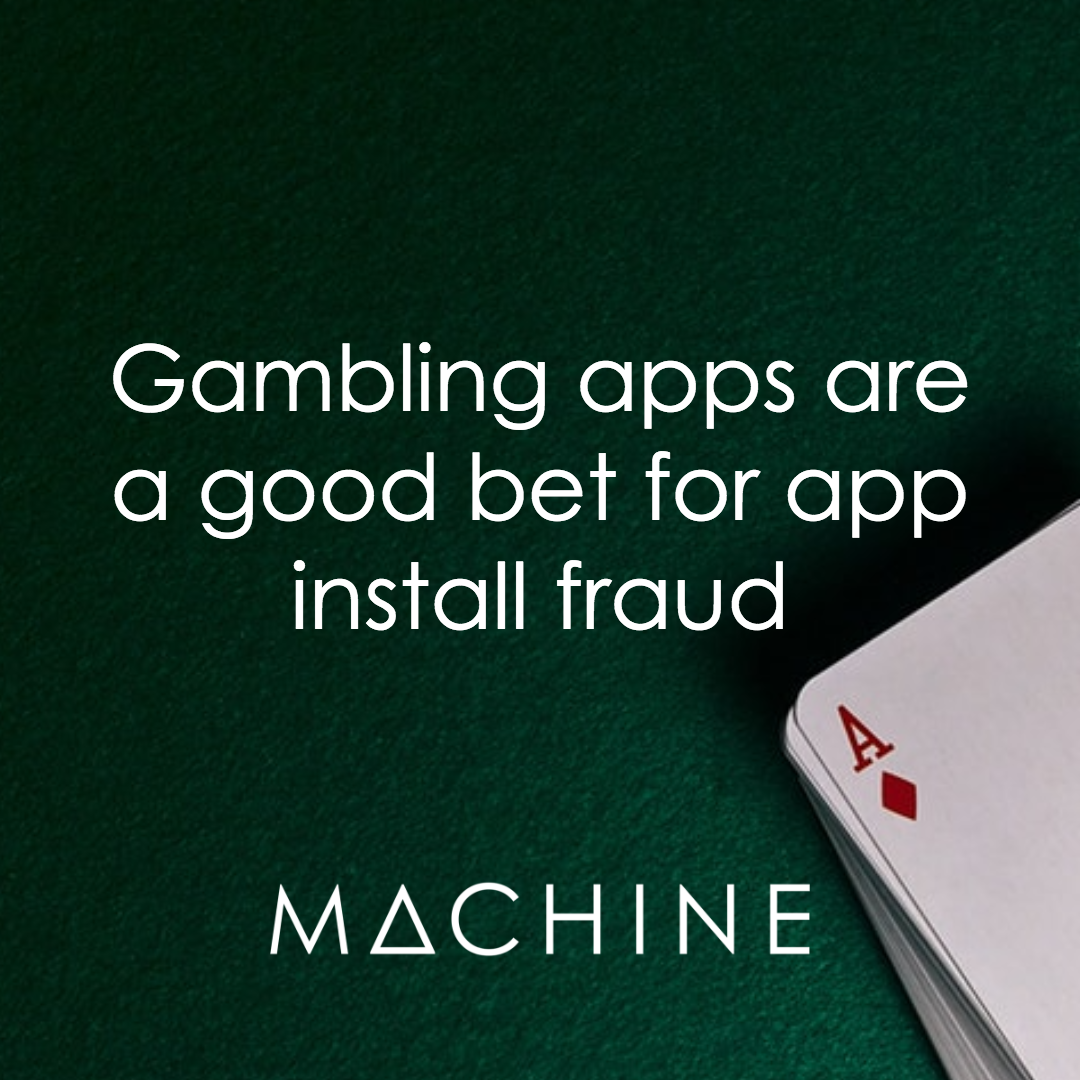 As you no doubt already know, gambling apps pay the highest cost-per-install rate in the market. However, that means they make the biggest, juiciest targets for app install fraud.

This probably isn’t the first you’re hearing about the fraud problem in digital marketing. You may even believe that you’ve got it sorted. Perhaps you have measures in place to deal with install farms and unauthorised incentivised installs – but you also need to plan for attribution fraud, the single biggest threat to gambling app install budgets.

The truth is, the scale of app install fraud is currently hugely underestimated, and you’re almost certainly more exposed than you think. You just might not know it yet.

In 2018, Machine has analysed over 14m app installs. 52% of them were fraudulent. For gambling campaigns specifically, this number is even higher – fraud levels for this vertical average 61%.

One of our recent gambling clients was already using other anti-fraud services. When they ran their campaigns through Machine, however, we picked up an extra 57% of fraudulent activity, over and above what was previously being detected. This is because, our technology asks different questions of the data, which picks up the incremental fraudulent app installs.

The methods used for app install fraud can be broken down into three varieties: unauthorised incentivised installs, install farms, and attribution fraud.

Unauthorised incentivised installs – or incent for short – come from real users but ones who, without your knowledge as an advertiser, are only doing so for a reward. These make up 13% of gambling app install fraud.
Install farms utilise hundreds of mobile devices assembled in one room, with a person clicking ads on them over and over again. These make up 25% of app install fraud in this vertical.

For an industry like gambling – one that’s driven by hard performance metrics such as first-time deposit – these two varieties of app install fraud varieties are relatively easy to spot. This is because the ‘users’ who come from incent and install farms simply don’t perform. They’re not going to make that all-important first-time deposit or do absolutely anything in the app beyond what they need to do in order to register an install or acquisition.
It will take a few days or weeks to spot this fraud, due to a lack of performance – but at least these types can be detected.

The biggest threat to gambling apps

Attribution fraud is rather more complicated. As mentioned, it’s the single biggest threat to gambling apps, making up 62 percent of all install fraud, and it’s much harder to spot.

Attribution fraud exploits the last-click attribution model used by all app attribution platforms. Fraudulent vendors steal the credit for installs that actually happened organically, or were generated by another media supplier.
As we all know, gambling brands spend big on TV and other above-the-line media – certainly one the biggest spenders in any app category.
So, you’ve spent months working on your above-the-line campaign. Customers who hear and see those ads race to the app store to grab your app… and a fraudulent vendor just swoops in at the last minute, taking credit for all those installs.

On paper, installs generated via attribution fraud look good. Because these are real users, ones who were genuinely motivated to download your app, they perform well. That means you’re essentially paying out twice for an install, with half the money going to someone who had nothing to do with acquiring that user. It sounds like you’re being ripped off, doesn’t it?

Why we don’t talk about app install fraud

Because of the high CPIs associated with gambling apps, fraudsters have plenty of motivation to get more and more sophisticated with their methods, which makes them harder to catch. This is one reason that app install fraud is underreported.

The other is more insidious, because it comes from within the app marketing industry itself. The money spent on fraudulent installs – nearly two-thirds of paid gambling app install budgets, remember – helps to prop up the market.
When marketers discover the scale of the problem – the amount of fraud they’ve been letting through undetected – it can be difficult to report that to a client, or their boss. No one wants to risk losing their job, or be accused of negligence, and that means people can turn a blind eye to it.

There’s a very good reason for overcoming these concerns and facing up to the truth of app install fraud. Filter and block fraudulent installs, and though your paid app install figures will drop, those attributed to organic means will increase, keeping the total number of acquisitions the same. Simply put, you’ll get the same results you’re already getting, for less spend.
That means more budget to spend on performing media elsewhere, whether it’s putting more into app install ads with trustworthy publishers or boosting an existing TV campaign. Gambling might be one of the most attractive targets for fraudsters, but that doesn’t mean you have to be a victim.

This article was originally published on EGR on the 13th of March.

Six things to know about SKAdNetwork